“Greetings from Atri Astro Nadi Astrology center, Vaitheeswaran Koil. I, Mr. Selva Muthu Kumaran Phd., one of the most famed flourishing Vedic & Nadi Astrologer, Nadi Jyotish & palm leaf reader in India. I have started my career when I was 13, and persisting to enrich myself with this esoteric knowledge every day.

I inherited and learned most of it from my father, who is also a Nadi Astrologer originated from Vaitheeswaran Koil, Tamilnadu. With his & sages’ blessings(Sri Atri Maharishi & Mata Anusaya), horoscope analysis (Vedic Astrology) & Nadi Astrology Online reading has become my main forte.


Since, last 28 years, I'm practicing in this Astrology field. I have life time passion for Vedic Astrology, Nadi Astrology & Jeeva Nadi Reading. In addition to practicing Vedic Astrology and Nadi Astrology, I am also an expert on Yoga Kalai, Vasi Yogam, Numerology, Vasthu, & Gemmology. I believe in dissemination of true knowledge and therefore I am teaching & guiding others about this spiritual & holy science as my Gurus instructed me. Nothing can be achieved without a true guru, and I was fortunate to have two gurus in my life. I owe everything to my two gurus "Ekambaram" and "Maharishi Dhayanantha Jyothi Swamy". They are the main reason for that I have become an Online Best Nadi Astrologer from vaitheeswaran koil, Tamilnadu, India.

I have written around 450 articles in several magazines on issues including Vedic Astrology, Nadi Astrology, Palm Leaf Reading, Vedic Remedies, Spirituality, Numerology, Gems, & Vasthu Shastra. Using various techniques rooted in Vedic & Nadi Astrology, given the blessings of Sages((Sri Atri Maharishi & Mata Anusaya) & My Gurus I can accurately predict past, present & future life of a person. I can provide Nadi Astrology predictions in person as well as Online consulting by means of LIve Video Chat sessions such as Skype, WhatsApp to anyone across the world.

I have given predictions for numerous famous personalities in the field of cinema and politics in India. In 1999, I predicted for Chandra Babu Naidu (former chief minister of Andhra Pradesh) for his political career. Per the prediction he succeeded in politics (please refer to newspapers dated 11-08-1999). I have also been invited as guest speaker on spiritual and Vedic astrological discussions and commentaries in many T.V. channels & radio talk shows e.g. Sun TV and Raj TV. With my authentic accurate Nadi predictions, I have satisfied various Nadi seekers from all over the world as from Australia, USA, UK, Japan, Singapore, Malaysia, Canada, Sri Lanka, Holland, Belgium, and Germany.

Read: How to Get Online Nadi Reading Predictions

MR. SELVA MUTHU KUMARAN is the best & accurate Online Nadi Astrologer from Vaitheeswaran Koil who can envision your accurate future life predictions & about your past & future as well. This rich tradition of Nadi Astrology has been passed down from centuries & still exists in the current younger generation. 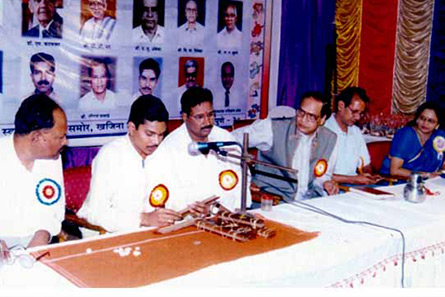 One of the most promising astrologist MR. SELVA MUTHU KUMARAN PhD is India's No.1 famous Best Online Nadi Astrologer who has created new strides not only in the domestic country but also globally. He is an Indian based Online Nadi Astrologer who offer Nadi Astrology services around the world to those who need it despite the distance & the difference. He caters to all the needs and has been helping the people who need it most and the most importantly to bring peace & harmony in their life.

Read: Our Clients’ Testimonials on my Online Nadi Astrology predictions

The significance of Nadi Astrologer

As you know, nowadays there are various Astrologers who have distinct thoughts of their own. No one accords with the principles of the other which in turn creates doubts and confusions in the mind of the common person who comes to a genuine Nadi Astrologer for his life predictions. But there are two most important aspects of a Nadi Astrologer, one is predicting an event & the second is the happening of the event at the predicted time.

These aspects are totally dependent on the Nadi Astrologer’s genuine knowledge & skill to predict from the Nadi Leaves which are pre-written by The Great sages of India thousands of years ago. The entire happenings of a seeker, which take place in his/her life, are pre-written in the Nadi Leaves of the individual. So The Nadi Astrologer must apply the correct principles of Nadi Astrology in order to derive accurate Nadi Predictions to predict the seeker’s entire life. These foresights which are written on the leaves from the day the person comes to have the services of Nadi Astrology.

So, the predictions are pre-written and these predictions are just interpreted by the traditional Nadi Astrologers. There is only one particular set of people who have access to these Nadi Palm leaves as this is a Nadi Service and is being practiced by generations downwards. In Our current generation this Nadi Astrology service is being given by MR. SELVA MUTHU KUMARAN PhD. Then there are millions of Palm leaves pre-written, one for each person in the world.

The most significant aspect of a Nadi Astrologer is not about just glancing over the life of a person but the objective of a Genuine Nadi Astrologer is to ascertain that the Bad Karma's influence is totally eradicated & an individual be directed towards the path of betterment & also to accentuate the importance of doing good Karma in life. Karma is developed from our thoughts & yields its result in action. And we all agree that we seek astrological concern only when we see some hindrances in life or to seek a suggestion for our actions to be executed.

Looking to change your life in a better way?